New Couple Alert! After years of keeping their romance a secret, the cat has finally been let out of the bag. American actor, singer, songwriter, comedian and record producer Jamie Foxx and American actress, producer and director Katie Holmes has officially went public about their intimate relationship. The long term rumored couple recently made a joint public appearance at the 2019 Met Gala where the also matched each other’s fly. According to various sources, the pair was f

Wendy Williams and her second husband Kevin Hunter tied the knot on November 30,1997. It’s been said that Williams and Hunter met at a skating rink in 1994, they then found interest in one another and got married three years later. The couple’s first child Kevin Hunter Jr. was born in the 2000s. Hunter served as Wendy's manager and as an executive producer of The Wendy Williams Show since it debuted in 2008. After over 20 years of marriage, the couple decided to split. Willia

It’s the season where your favorite celebrities takes on the red carpet for the 2019 Met Gala. The Met Gala has been in the works since 1946 as it’s known to be the Super Bowl of Fashion. This year’s Met Gala theme was “Camp: Notes on Fashion”. The 2019 Met Gala was co-chaired by Serena Williams, Lady Gaga, Anna Wintour, Alessandro Michele, and Harry Styles. On the first Monday in May all of your favorite superstars come together to rock out their changing theme of fashion. L

Love and Hip Hop is franchise on VH1 which televise reality tv series. Up next on Love & Hip Hop Hollywood. Sources says that Raz B from B2K will be joining the next season of LHHH. Omarion is allegedly returning to the upcoming season of LHHH as well. Omarion and the mother of his children were on the cast of season 1 and 2 so his return would be a great addition to the awaited season. Lil Fizz was also on the cast of LHHH by he unfortunately got fired. With two out of the f

Another addition to the royal family! Prince Harry and Meghan Markle celebrates life as their son entered the world. Baby Sussex was born on May 6th and was named Archie Harrison Mountbatten-Windsor. The baby arrived at 5:26am and weighed 7 pounds and 3 ounces. Baby Sussex came just in time for Markle to enjoy her first official Mother’s Day with her family. Prince Harry was elated when he announced the news when his first born son was finally here. He also thanked the public

India Arie recently dropped a visual for “Steady Love”, a single off her recent album Worthy. The video features the famous rapper and actor, David Banner as her love interest. In addition to the soulful melodic tone of India's voice, the simple snapping of the beat and the acoustic guitar chords, the visual aspects compliment the song well. The song "Steady Love" is all about India confessing her love for a man that has finally shown consistency in her life. She sings, "He's 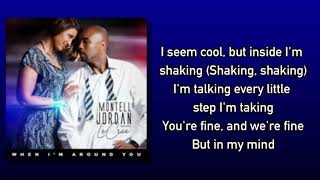 Montell Jordan returns with new song, “When I'm Around You"

R&B veteran Montell Jordan is back from a long-awaited hiatus with his new track, “When I'm Around You". Montell never fails to keep the party going with his smooth R&B vocals and sound that blends beautifully with a 90s feel hip-hop beat. The song gushes over sentiments Jordan feels for his wife, Kristin Jordan, who is seen on the cover art for the track. The song is a sweet reminder and proclamation of how much Jordan is infatuated and still so in love with his wife. In t

According to New York Times and Forbes, IGOR is Tyler, the Creator’s first No. 1 album. IGOR is Tyler’s 6th studio album, after releasing Flower Boy in 2017. Tyler tweeted in celebration, “IGOR, NUMBER UNO, STANK YOU.” The album IGOR is written, arranged, and produced by Tyler. The album is raw, honest, and a fresh and emotional new sound from Tyler, the Creator. Its boastful beginning, IGOR’s Theme, sets the tone for the sound of the album with a long electric sound leading

Roc Nation’s new Atlanta native artists, BHM aka Born Hit Makers dropped their latest EP this past week on May 17th. The trio first gained their popularity after releasing their single, “Lil Mama”, which is a featured track on the EP. The project is entitled APElanta and consists of six tracks, including a feature with a fellow Atlanta native, Paper Lovee. Though it is easy to try to compare them to the infamous group, Migos, BHM brings a refreshing vibe to the music scene. I
1
234